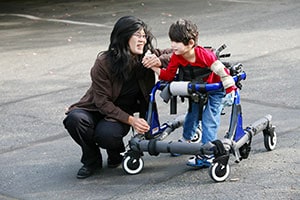 Cerebral palsy is a movement disorder which results from damage to a baby's brain from oxygen loss during pregnancy or childbirth. The injury to the baby's developing brain permanently impairs their ability to control and coordinate the movement of muscles in the body. A high percentage of cerebral palsy cases are the direct result of medical negligence during labor and delivery. Each year about 10,000 new babies are delivered in Washington, DC hospitals. Despite the city's high quality of healthcare, a small handful of these District of Columbia newborns will invariably suffer oxygen deprivation during delivery and be diagnosed with cerebral palsy. At least half of these cerebral palsy cases will be linked to medical malpractice.

Cerebral palsy is not a single condition but an umbrella term used to describe a group related physical movement disorders associated with abnormalities in the brain. All muscles movements in the body are directed and coordinated by impulse signals from the brain. When someone has cerebral palsy their brain is not able to send out normal movement signals to certain muscles. This internal neurologic malfunction results in permanent physical disabilities.

The physical disabilities and movement abnormalities caused by cerebral palsy can vary significantly depending on what type of CP is involved the severity. More severe cases of cerebral palsy can leave a person permanently confined to a wheelchair and unable to normally control any part of the body. CP also causes other problems such as cognitive impairment, epilepsy / seizures, and problems with speech and vision.

All disorders under the cerebral palsy umbrella are the result of a very specific type of damage to the brain which results from oxygen deprivation occurring at some point during pregnancy or, more often, during labor and delivery. The brain requires constant oxygen or cells rapidly begin to decay and die. During pregnancy and childbirth babies are dependent on maternal oxygen delivered through the placenta. When maternal oxygen is momentarily cut off or restricted for even a brief period of time cells in the baby's brain can be permanently damaged before the brain is fully formed. This particular type of neurologic cell damage from oxygen loss permanently impairs the brain's ability to direct muscle movement. A lifetime of cerebral palsy is often caused by just hours or minutes of oxygen disruption.

The reason cerebral palsy gives rise to so many malpractice lawsuits is simple: brain damage from oxygen deprivation is something doctors can prevent. Under current medical standards doctors have the ability to diagnose and manage most obstetric complications and prevent harm to the baby. If a complication during labor and delivery threatens to disrupt maternal oxygen delivery the baby can almost always be saved from harm with a prompt emergency C-section delivery. Labor and delivery teams at a modern hospital can perform an emergency C-section in a matter of minutes. Moreover, diagnostic technologies such as electronic fetal monitoring devices allow doctors to identify early signs of oxygen disruption.

DC has its own body of laws that apply to cerebral palsy and other medical malpractice cases. For the most part the tort laws in DC are very favorable to plaintiffs and malpractice victims. For starters, DC courts have liberally interpreted the "discovery rule" for purposes of applying the statute of limitations on malpractice claims. This gives malpractice plaintiffs more time to file their case before it is time barred. The most significant perk of DC law for malpractice plaintiffs is that unlike most other states, there is no maximum cap on the amount of damages that a jury can award. This is particularly relevant to cerebral palsy cases which can generate huge verdicts.

Hundreds of medical malpractice lawsuits based on cerebral palsy get filed around the country every year. However, comparatively few cerebral palsy cases get filed in DC Courts. There are a number of reasons for this. First, few than 100 medical malpractice cases of any type get filed in DC annually. This is partly due to the limited population size and partly due to the fact that DC malpractice victims are often residents of Maryland or Virginia and chose to file their case in their homes states. Less than 5 cerebral palsy cases a year (and sometimes not even that) get filed in DC. Moreover, as we said, there is no cap on birth injury case in the District of Columbia which makes these cases easier to settle (with confidentiality clauses, they never see the light of day). Due to these small numbers, there are only 2 reported verdicts for DC cerebral palsy cases and only 1 involved a birth injury:

Below are sample verdicts for cerebral palsy cases outside of DC:

Our lawyers regularly handle cerebral palsy malpractice cases in Washington DC. If you have been injured, call our lawyers at 800-553-8082 or select here for a free consultation.