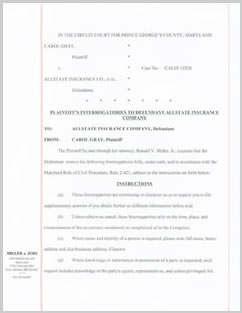 The lawyers at Miller & Zois handle all types of major personal injury cases in Washington DC including slip and falls; pharmaceutical and product liability; serious dog bites; nursing home negligence; and tort claims against the federal government. DC is generally a very favorable jurisdiction for all personal injury cases.

Dog owners in DC are legally responsible for controlling their dogs and making sure they dot bite people. If you are attacked and bitten by a dog in DC you may be legally entitled to sue the owner of the dog to recover damages for your injuries. Most dog bites only cause minor injuries so it is not even worthwhile to file a lawsuit. Dog bite lawsuits are more for attacks by larger, stronger dogs that leave the victim with serious, permanent or disfiguring injuries.

Under DC law a dog owner can be liable for injuries caused by their dog under the legal theories: (1) negligence or (2) statutory strict liability. The statutory strict liability comes from a DC statue that says that a dog owners are strictly liable for any injuries their dog causes when the dog is "at large" even if the dog is not known to be dangerous. This basically means that if a dog is not on a leash or gets out of a fenced yard the owner(s) will be liable for any injuries it causes even if the owner has no reason to believe the dog is dangerous.

When a dog is not "at large" the negligence theory applies. Holding a dog owner liable under negligence is somewhat harder because the plaintiff must prove that the owner knew or should have known that their dog was potentially dangerous (e.g., aggressive breeds like Pit Bulls, or dogs with a known history of biting). Negligence is also harder because defendants can raise contributory negligence as a valid defense. For example if someone trespasses into a fenced yard and gets attacked by a dog they probably won't be able to recover against the owner. Only a handful of major dog bite cases get file in DC each year and most of them do not go to trial. As a result there are not many report verdicts for recent DC dog cases.

Anytime a person is seriously injured by a "product" they can potentially sue the manufacturer or seller of that product if it was defectively designed or manufactured in a way that made it unsafe. The concept of "product" for purposes of product liability law is very, very broad. A product can include almost any device, substance, material, food or machine that is sold to consumers. Products include drugs, automobiles, medical devices, food products, tools, construction materials, light fixtures, tires, cigarettes, etc. Product liability law originates from the common law theory that manufacturers have a duty to design and make products that a reasonably safe and not likely to injure consumers. When a product injures someone the manufacturer can be sued under 2 primary legal theories: negligence and strict liability. Negligence claims in product liability cases come in several different forms: failure to warn of potential dangers; negligent design; failure to include safety features; negligent marketing; and manufacturing defects. Strict liability applies to products that are not defective in their design or manufacture but which turned out to be "unreasonably dangerous" such as asbestos products or lead paint.

Pharmaceutical cases are a particular type of product liability case involving prescription drugs that cause medical injuries. Most pharmaceutical cases start when evidence comes forward indicating that an approved medication is causing injuries prompting an FDA recall. Shortly after an FDA safety recall all of the individuals across the country who have been harmed by the drug start filing lawsuits against the drug manufacturer and theses hundreds or thousands of cases are consolidated into a class-action or MDL proceeding. Pharmaceutical cases can be very complex with numerous opposing experts and conflicting scientific evidence. In most cases the basic allegation is that the drug company developed, marketed and sold the drug without any safety warnings despite having some evidence to indicate that it might cause harm.

Below are recently reported verdicts and settlements in DC product liability cases:

Miller & Zois is one of the top plaintiff's firms in the DC, MD, VA area and we handle all types of serious injury cases in Washington DC. If you have been injured, call our lawyers at 800-553-8082 or select here for a free consultation.