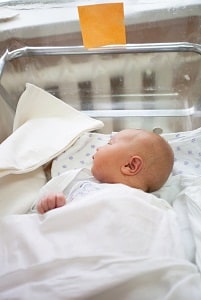 The phrase "birth injury" typically means any type of physical damage or harm that a baby experiences during labor and delivery. Childbirth is a physically difficult process so injuries to the baby are unavoidable in some cases. However, a large percentage of birth injuries are actually the direct result of medical errors or negligent care. Although Pennsylvania is home to some of the best hospitals in the world, hundreds of birth injuries still occur every year as a result of medical negligence. Fortunately, Pennsylvania law gives parents of injured babies the right to seek financial compensation from negligent healthcare providers. This page will summarize: (1) the most common types of birth injuries in Pennsylvania; (2) the medical errors that cause them;

Orthopedic injuries (broken bones), bruises, lacerations and other external physical injuries to the baby are very common in difficult vaginal deliveries. Getting through the narrow birth canal is a difficult progression that is physically strenuous on the baby. Often the pushing, pulling and twisting forces involved in this process result in broken bones, contusions, and cuts. For obvious reasons, larger babies are more at risk for these types of injuries. Complications like shoulder dystocia or fetal macrosomia also make orthopedic injuries and external trauma more likely. Below are some of the most common types of injuries in this category:

The majority of brain injuries during childbirth are caused by oxygen deprivation. The brain must get a continuous flow of oxygenated blood in order to survive. If this supply of oxygen is cut or restricted cells in the brain will die in just a short period of time. During labor and delivery, the delivery of oxygen to the baby's brain is vulnerable to interruption by a number of events. Oxygen deprivation during childbirth causes permanent brain damage that can result in certain disabilities. The most common birth injury caused by brain damage is cerebral palsy.

Pennsylvania defines the "standard of care" as the normal medical care another doctor would have provided under similar circumstances. In order to have a valid claim for malpractice, the negligent care or mistake must also result in injury. For example, let's say a doctor gets numerous warnings of fetal distress from the monitoring equipment during labor. The doctor disregards the warnings and attempts to deliver the baby vaginally for another 90 minutes. Eventually, the doctor realizes the baby is in real danger and orders an emergency C-section, but the baby is born with brain damage. To prevail on a malpractice claim, the parents only need to show that a normal doctor under the same circumstances would not have ignored the fetal distress warnings and could have avoided injury to the baby with a timely C-section.

Pennsylvania also has some favorable law when it comes to making birth injury claims against hospitals. In a case called Thompson v. Nasson, the Pennsylvania Supreme Court created an independent cause of action for corporate negligence arising from the policies, actions, or inactions of the hospital or HMO itself rather than any of the specific acts of the individual HMO or hospital employees. Under corporate liability, a corporation can be held directly liable as opposed to vicariously liable for its own negligent acts. When crafting corporate liability, the Supreme Court recognized that such liability was justified based upon the comprehensive nature of the healthcare provided by a hospital.

Below are summaries of recently reported settlements and verdicts from Pennsylvania birth injury cases.

The lawyers at Miller & Zois have handled hundreds of birth injury malpractice cases and have a long track record of delivering effective, meaningful results to our clients. If your new baby has a birth injury and you think it might be the result of medical negligence, Miller & Zois can help. We will gather your medical records and fully investigate your case and get financial compensation if you have a valid claim. Calls us at 800-553-8082 or get an online case evaluation.