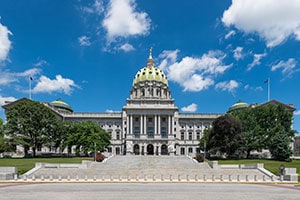 Pennsylvania property owners can be liable under strict liability when there is a condition or activity on their property that is considered abnormally dangerous in nature. An "abnormally dangerous" activity or condition is define as something that cannot be made completely safe and poses an unavoidable risk of harm even when done with reasonable care. Classic examples of abnormally dangerous activities include manufacturing or testing high explosives; storing toxic chemicals; or keeping extremely dangerous animals. Strict liability is not frequently used as a theory of recovery in Pennsylvania slip and falls cases.

Most slip and falls cases (and other types of premises liability) are based on negligence. To hold a property owner liable for premises liability under a general negligence theory, the plaintiff must prove 2 primary elements: (1) there was hazardous condition or activity on the property; and (2) the property owner knew about the hazardous condition but failed to do anything about it.

Most slip and fall cases sink or swim based on the 2nd element which requires proof that the property owner had knowledge of a hazard. "I didn't know about it" or some variation on that theme is the standard property owner defense in most slip and fall cases. To overcome this defense a slip and fall plaintiff must be able to present some sort of evidence showing that the owner of the property was actually aware of the hazardous condition or activity. So if someone slips on a wet floor at a Wal-Mart or Target outside Philadelphia, they will need evidence that the store employees were aware of the wet floor at the time but did nothing about it.

Neglect and abuse in nursing homes is a major problem across the country and Pennsylvania is no exception. According to the Pennsylvania Department of Health nearly 100,000 elderly Pennsylvanians are now residents in the state's 700 nursing homes and assisted living facilities. The grim reality is that hundreds of these elderly nursing home residents are victims of daily neglect and/or intentional abuse.

When nursing home residents are injured by negligent care or abusive conduct they have every right to sue their nursing home. If the nursing home resident passes away or lack the mental capacity to bring suit against the facility Pennsylvania law allows claims to be brought by their estate or survivors. Nursing homes in Pennsylvania are considered licensed health care facilities (much like hospitals) so they can be sued for medical malpractice as well as under more general tort theories.

When a Pennsylvania consumer is seriously harmed by a defective product they are legally entitled to sue the manufacturer and/or seller for compensation. Defective products for liability purposes can include almost anything including a device, material, food, machine, chemical, toy, tool, etc. Product liability also applies to more sophisticated medical products such medical devices or prescription medications.