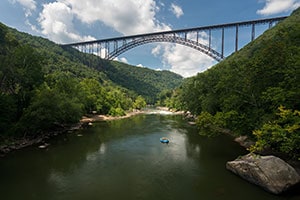 Anytime someone is physically injured as a result of negligence or misconduct of another person or entity, West Virginia law entitles the injured person to legal compensation for their losses. Miller & Zois is widely regarded as one of the top personal injury firms in the Mid-Atlantic region. Our lawyers handle more than motor vehicle accident, medical malpractice and birth injury cases. We have a long history of success in all types of major personal injury cases in including slip and falls; pharmaceutical and product liability; serious dog bites; nursing home negligence; and tort claims against the federal government. Miller & Zois is based in Baltimore but West Virginia has always been one of our "home base" jurisdictions. We have local counsel there to assist us with our cases which means clients get two law firms for the exact same price as one. We have earned millions of dollars for our clients in West Virginia and have been handling cases there since 1996 (before Miller & Zois was formed). We regularly handle all types of personal injury cases in West Virginia. Below is a summary of other types of common injury cases in West Virginia with some thoughts about the settlement value of these claims.

Under West Virginia law property owners must maintain their property in a safe and reasonable condition. This includes all homeowners, business owners, and other entities that own public areas. Premises liability is the legal concept for which property owners are responsible for injuries and harm caused by unsafe conditions on the landowner's premises. One of the most common personal injury actions stemming from premises liability are slip and fall accidents.

Below are some reported verdicts and settlements from recent premises liability cases in West Virginia:

In West Virginia, dog owners are strictly liable for their injuries caused by their dogs when they are "running at large." Under West Virginia Code § 19-20-13, an owner of any dog is liable for any damages inflicted upon the person or property of another by a dog at large. This means that an injured person does not have to prove that the owner or keeper knew the dog would act aggressively or cause injuries. If the owner allowed the dog to run at large and the dog caused the injury, the owner is responsible for the damages.

In a case when a dog is not "at large" or someone other than owner allowed the dog to be "at large" the injured person must prove that the owner's negligence caused the injury. Negligence will not attach unless the injured party can demonstrate that the injury could reasonably and foreseeably have been anticipated by the owner or keeper of the domestic animal.

Additionally, in West Virginia a person is prohibited from keeping a dog if he or she knows it is vicious, dangerous, or in the habit of biting or attacking other people, regardless of whether the dog wears a tag or muzzle. If the injured person can show that owner had knowledge that the dog had a dangerous or vicious propensity, the owner will be strictly liable.

Below are recently reported verdicts and settles in West Virginia in dog bite cases:

If a person is injured by a "product," the manufacture or seller may be held liable for placing the defective product into the hands of a consumer. Generally, the law requires that a product meet the ordinary expectation of the consumer. In West Virginia, a product liability action may be based on negligence, strict liability, or breach of warranty.

Strict Liability: In strict liability theory of recovery, the plaintiff does not have to prove that the manufacture was negligent in some particular fashion. It allows proof of defective condition of the product as the principal basis of liability. Under strict liability, the focus is on the defective product and not the defendant's conduct. This allows a plaintiff in West Virginia to assert a strict liability against any party in the chain of distribution, even "innocent sellers."

Breach of Warranty: Generally, the premise behind warranty is that a producer promises or guarantees that a product will act or perform in a certain way. West Virginia generally does not require contractual privity in order to file a claim for breach of warranty. This means that a person does not need to have been a party to the original warranty to have standing to file a claim. A plaintiff may sue any party in the chain of distribution.

Below are recently reported verdicts and settlements in West Virginia product liability and drug cases:

The personal injury attorneys at Miller & Zois can help you get the best result in your personal injury case. Call us today at 800-553-8082 or get a free online consultation.