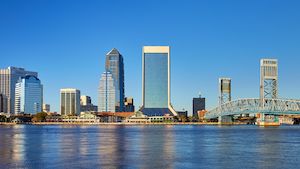 At nearly 70,000 square miles, Florida is the 22nd biggest geographical state in the U.S. Florida’s population of 21 million makes it the 3rd most populous state. Florida has several large, densely populated metropolitan areas including Miami, Jacksonville, and Tampa Bay. 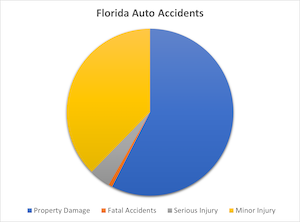 In 2020, Florida had 3,098 fatal auto accidents resulting the deaths of 3,332 drivers, pedestrians, and passengers. 32% of these fatal accidents involved drug and/or alcohol impaired drivers. Motorcycle riders accounted for 552 of the fatalities and lack of seat belts contributed a similar share.

Like all states, there are 3 separate bodies of law that govern driving, vehicles and auto accidents in Florida. Florida traffic law establishes the rules of the road (e.g., right-of-way, speed limits, etc.). A separate body of law governs the rules of auto insurance. Both the traffic and insurance laws are codified in Florida’s statutes. Finally, Florida’s common law of tort governs financial liability related to auto accidents and personal injury lawsuits.

Listed below are recently reported settlements and verdicts from Florida car accident lawsuits. These cases are provided for informational purposes only, to give examples of the types of injuries and their compensation payout value in Florida auto accident cases. You cannot use this to determine the settlement value of your Florida auto tort case. They are very useful, however, for getting a feel for how much money juries and insurance companies give in similar types of cases. These will help you better understand the settlement value of your case.

Branen v. La Mesa RV Center  - 2022, Volusia County: $10,031,536 Verdict. A 29-year-old pedestrian walked along the side of the road. He was struck by an RV’s side mirror. The man suffered severe head trauma. He died in the hospital. The man’s father alleged negligence against the RV driver. He claimed he failed to leave enough room between the vehicle and the deceased. The Volusia County jury awarded $10,031,536.

Vail v. Mancia - 2022, Orange County: $354,224 Verdict. A man was rear-ended at the intersection of I-4 and State Road 408 in Orlando. He sustained permanent injuries. The man alleged negligence against the at-fault driver. He claimed she failed to slow down for traffic and avoid a collision. The Organ County jury awarded $354,224.

Clemons v. Lofton - 2022, Alachua County: $2,054,660 Verdict. A married couple was rear-ended by a tractor-trailer. They suffered severe injuries. The couple sustained permanent physical and mental impairments. They alleged negligence against the truck driver. The couple claimed he unsafely operated his vehicle. They also made a vicarious liability claim. The Alachua County jury awarded $2,054,660.

Chapman v. Flowers Baking Co. - 2021, Clay County: $71,999 Verdict. A woman occupied a game trailer awning. She was struck by a truck. The woman suffered severe injuries. She alleged negligence against the truck driver. The woman claimed he failed to maintain an appropriate lookout. A Clay County jury awarded $71,999.

Phillips v. TDC Entertainment - 2021, Alachua County: $469,000 Verdict. A woman yielded to pedestrians at a Gainesville intersection. She was subsequently rear-ended. The woman suffered permanent injuries. She alleged negligence against the at-fault driver. The woman claimed he failed to stop for traffic ahead and avoid a collision. An Alachua County jury awarded $469,000.

Johnson v. Maurin - 2021, Escambia County: $20,725 Verdict. A man was rear-ended in a chain-reaction collision. He suffered personal injuries. The man alleged negligence against the driver who initiated the collision. He claimed he failed to maintain an appropriate lookout. The Escambia County jury awarded $20,725.

Dennehy v. Geico - 2021, St. Johns County: $16,690 Verdict. A married couple was rear-ended in St. Augustine. The wife suffered permanent injuries. The couple alleged negligence against the at-fault driver. They claimed she failed to slow down for traffic ahead. The couple also made a UIM claim. A St. Johns County jury awarded $16,690.

Paterson v. Stroup - 2021, Alachua County: $217,000 Verdict. A man was struck on Route 441 in High Springs. He suffered permanent injuries. The man alleged negligence against the at-fault driver. He claimed he unsafely operated his vehicle. The man also made a vicarious liability claim. An Alachua County jury awarded $217,000.

Figueroa v. Ortiz  - 2021, Osceola County: $800,000 Verdict. A passenger was involved in a rear-end collision. She suffered severe cervical and lumbar injuries. The woman alleged negligence against the at-fault driver. She claimed he failed to maintain an appropriate lookout. The Osceola County jury awarded $800,000.

Gonzalez v. Cooper - 2021, Brevard County: $897,760 Verdict. A woman was rear-ended in Melbourne. She suffered severe spinal injuries. The woman alleged that the at-fault driver’s failure to watch the road cause her injuries. A Brevard County jury awarded $897,760.